Scott Steiner is a jack-of-all-trades for Resistance Pro.  Mostly he can be seen helping Security, although you might see him just about anywhere during the shows.  As a matter of fact, within a few years, you might even see him in the ring.  With his name, that is a natural fit.
Scott is a great guy and a favorite around R Pro.  The folks over at JohngysBeat.com like him, too.  He did a great job covering the airplane pull for charity event last summer (which can be found at On the Beat with Resistance Pro at the Special Olympics Plane Pull).
Scott and his mom Heidi were in attendance at a recent WWE event in Rosemont, IL.  They got close enough for Scott to get a quick photo with CM Punk, whom Scott describes as his "hero."
Obviously Scott was happy, but I heard a lot of other good reports from fans meeting Punk at the event and elsewhere on this trip.  I am happy to report good moments like these.  Meeting your favorites is always a big deal and it is just wonderful when that person is nice.
I met Punk at Wizard World and despite it being a brief moment, Punk was cool then.  Maybe some of those negative reports are slightly exaggerated? 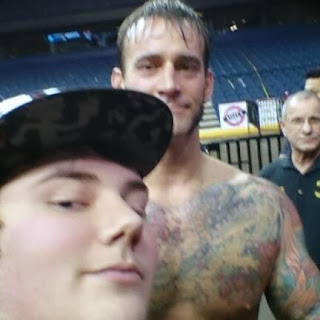 Scott Steiner and CM Punk in Rosemont, IL-December 2013.
Posted by Johngy at 6:00 AM