Kevin Sullivan and the Tree of Woe

Maybe because I cheered for the underdog or maybe because he didn't have the flash and appearance of the WWF wrestlers of the day, Kevin Sullivan was one of my favorite wrestlers.  Although he never won a major singles title in the big organizations, Sullivan remained my favorite.
Sullivan is known for having a great wrestling mind, both in and out of the ring.  He knew how to tell a story in the ring and knew how to write one outside of the ring.  He has been credited with great ideas and sometimes blamed for bad decisions.
Sullivan isn't the typical convention guest.  He doesn't seem to like the limelight.  He is quiet and reserved.
I first met him in 2005 at the first Wrestlers Reunion.  He was polite, but not really friendly or talkative.  I was a bit disappointed, because I was hoping to get more from one of my favorites.
I met him again in 2010 at Wizard World and it was a better experience.  We talked a bit about some of his big career moments and I told him that I thought he never got the respect he deserved (which I really believe).
He thanked us for our interest.  Maybe the presence of JayHawk Evans softened him. Maybe he was just happy to talk to fans that weren't just "flavor of the month" guys.  The convention isn't exactly full of old school wrestling fans.
Sullivan is pretty much retired from the wrestling business.  He owns Froggy's Fitness in Tavernier (FL).  I know wrestling continues to change (and not necessarily for the better), but I still think there is a place for Sullivan. 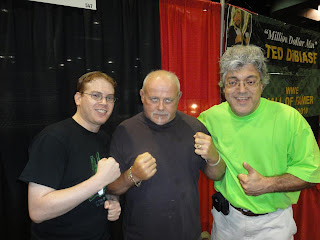 JayHawk Evans, Kevin Sullivan and me in Rosemont, IL-August 2010.
Posted by Johngy at 5:55 AM

I'm a big fan of "Sulli" too. Great pic with the eyes!