I have known Dave Zeman for about 15 years.  We originally met at AU Sports and Memorabilia and we bonded over our mutual love of sports, trivia, Seinfeld and more.
Dave is truly one of the nicest guys you would ever want to meet.  He is also very interesting.  He co-authored two books, Great Baseball Feats, Facts and Firsts and The Baseball Rookies Encyclopedia.  I actually own a signed copy of the BRE and I have gone back and reread it many times, as well as have lent it to fellow baseball fan friends (although, I probably should have made them buy copies).
Dave knows his stuff.  If you want to know the starting rotation of the 1916 Chicago Cubs, ask Dave.  He will know it (and he is probably reciting it as he reads this).
He is not a one trick pony either.  He can quote almost any Seinfeld episode.  Ask him to name all of Kramer's unseen friends and he can do that, too.
Dave is appearing here today because he met Monty the Moose in Wisconsin last year.  Monty makes frequent appearances at Wilderness, America's largest waterpark resort.  I have since learned there is also a Molly the Moose.  I have no idea if they are related in any way or if they are just two random moose characters hanging around the waterpark.
If you happen to run into Dave at AU (or at a waterpark or elsewhere), feel free to try to stump him with baseball trivia.  My money is on Dave!
If you happen to run into Monty (or Molly), feel free to snap a picture and send it to me.  I am always happy to run fun mascot pictures. 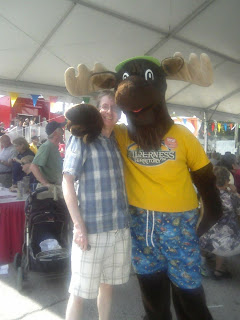