This post could have also been titled "Cards That Never Were."  Yesterday, in honor of tomorrow's Bears game, I showed my card creations for Al Woodall, former Jets backup quarterback.  Today, I am featuring the man ahead of him on the depth chart.
Broadway Joe Namath starred for the Jets from 1965-1976, before finishing his career with the Los Angeles Rams.  Namath had some issues with Topps using his likeness and therefore collectors were deprived of his cards for the last few years of his Hall of Fame career.  Steve at TheCowboysGuide.com has solved that problem by creating the missing Namath cards.
Steve's site, as the name would indicate, is very much dedicated to the Cowboys.  It isn;t exclusively Cowboys though, as he has created a bunch of non-Cowboys cards, such as the Namath ones below.
I stumbled upon Steve's site when I was looking for images for me to use to create Cowboys cards that I deemed were overlooked.  I first saw Steve's version of a 1975 Danny White card.  Topps first included White in their 1977 set.  A few hours later (no joke, I was on his site for hours), I saw so many cards that Steve created that I had wanted to make.  I no longer needed to do them, because his were masterful.  I'll be highlighting those Cowboys creations in the future.
Back to Namath, I love his five creations, especially the 1978 Rams card.  To be honest, each of his works of art is cool and really fits the card feel of that year.  I would have loved to have these cards as a young collector, instead of the retread Al Woodall in 1976.  At least now, I can see them and be sent back in time for a few minutes.
The other great thing about Steve's masterpieces is that he sells them.  You can actually buy these cards, unlike most of everyone else's virtual creations.  Steve's cards also come with the standard card back including stats etc.  These are all just about perfect.
If you are a card collector or a fan of Cards That Never Were, you really need to check out TheCowboysGuide.com.
The Jets of tomorrow will not have Namath at quarterback.  Geno Smith is their current quarterback and he already has more cards than Namath did (counting variations and multiple companies).  I am hoping Smith does not look like Namath tomorrow.  I am hoping he doesn't even look like Woodall.  I'm hoping for a J.J. Jones-type game. 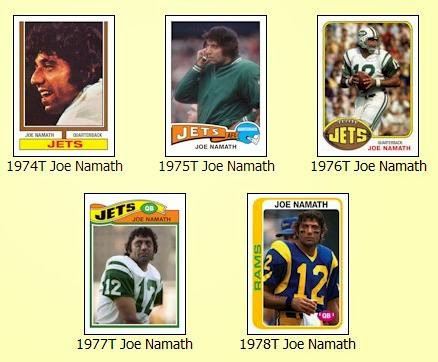