Cards That Never Were: 1977 Pat Toomay

This is a recurring feature, which I borrowed from several other bloggers.  Like my talented blogging cohorts, I have created cards for players who did not have a card when I feel they should have.

Pat Toomay is an interesting guy.  He played ten seasons in the NFL (with Dallas, Buffalo, Tampa Bay and Oakland).  He was durable and productive.  Unfortunately, he was also a bit controversial at times.  Toomay played on two Super Bowl teams with the Cowboys and a winless season with the Bucs.  He also authored a few books, including The Crunch, which was published during his career and was an insider's look at life in the NFL (one of teh controversial aspects of his career).
Toomay had two cards during his career.  He appeared on 1974 and 1976 Topps cards.  That leaves 8 possible cards of Toomay which were never made (4 with the Cowboys, 1 with the Bucs and 3 with the Raiders.
Steve over at TheCowboysGuide.com created the missing Cowboys cards (among his many creations).  I encourage everyone to go to his site and check out all of his stuff.  The guy is a football card genius and he sells his creations.
I found a picture of Toomay with the Bucs.  It is a great shot, especially considering the woeful season the Bucs had.  Toomay is on the bench, rubbing his eyes.  He probably couldn't believe how bad that team was.
I could not find any pictures of Toomay with the Raiders.  How does that happen?  If I find any pictures of Toomay with the Raiders, I will create a card for him.  Until then, I am enjoying the goodness of this 1977 Toomay Buccaneers card. 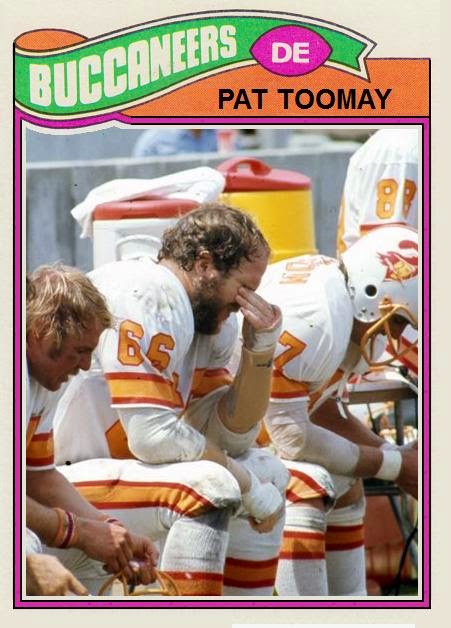 J, that's a great shot. I do have a couple of Raider photos that might work for a substitute card. Thanks for working up this one.

Mr. Toomay,
Thanks for stopping by and commenting. Feel free to email any pictures of you with the Raiders and I'll make virtual cards with those, like I did for the Tampa year.
I'm a long time fan. I've read your books. If you are ever in the Chicago area, I'd love to meet you. You were one of my very favorites as I grew up.
I can always be reached at Johngy1@aol.com
Thanks again.
John