I first saw actor Jeff Fahey in the early 1980's, when he was on tv's One Life to Live.  Soon, I enjoyed him in Psycho III, Lawnmower Man, Body Parts, Sketch Artist and other films.  By then, I was hooked on his work.
I first saw Mad Man Pondo at Resistance Pro wrestling.  I had previously heard of him, but had no idea what to expect.  Despite his hardcore image, he is actually a super nice guy.  I have seen him help out quite a few wrestlers.  He can still go in the ring, but he is almost like a player-coach.
He also happens to be a big horror fan and a convention goer.  I always find it interesting when celebrities meet celebrities.  I also find it interesting to see which celebrities my friends like to meet.
When I saw the pic of Pondo meeting Fahey, I had to run it.  Fahey has had an excellent career, but he flies a bit under the radar.  I just thought it was cool that Pndo would want a picture with one of my favorite "underrated" guys. 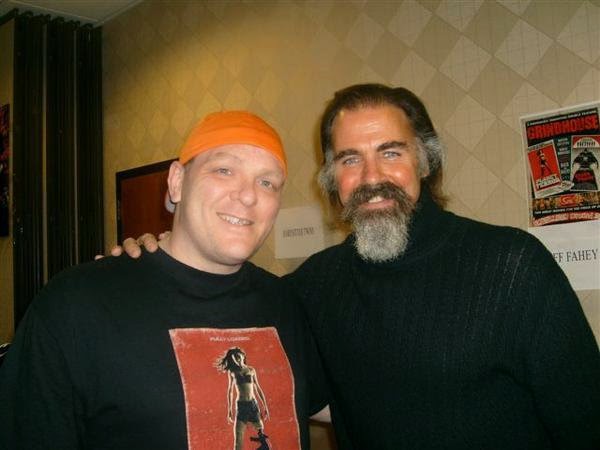