Athletes get trading cards.  Why not celebrities?  At least celebrities wearing athletic jerseys should get cards.  I am doing my best to create cards for jersey-clad celebs.  Today, I feature two iconic actors showing their basketball fandom.

Born in Chicago, IL, Harrison Ford's first big role was in "American Graffiti."  Since then, he has starred in some of the most successful movies ever made.  For his Celebrity Jersey Card picture on the very frustrating "tall" Topps cards, Ford is sporting Kobe Bryant's #24.  I would have preferred he went old school wit a Jerry West jersey, but Ford seems to be trying to be hip these days anyway. 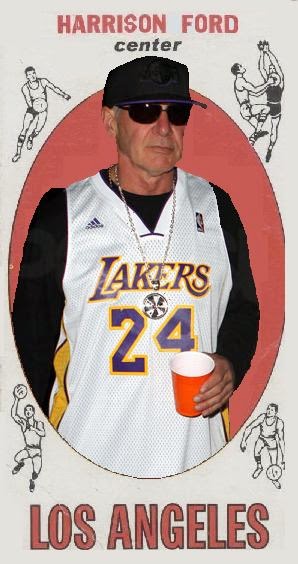 Born in Germany, Bruce Willis gained fame from tv's Moonlighting."  Since then, he went on to star in some of the most successful action films of all time.  For his Celebrity Jersey Card picture on the much-disliked tri-paneled Topps card, Willis is wearing #15 for Vince Carter.  I would go old-school for Willis, except the previous players wearing #15 were not too impressive.