Christopher Herrmann stars on tv's Chicago Fire.  Dominique Collins plays football for the Chicago Bliss, who play their home games at Toyota Park, home of the Chicago Fire soccer team.
That's kind of a long way to make a long stretch to connect these two.  No connection is really needed though.  The fact is they are two of Chicago's favorites.
DC is a valuable member of the two time Legends Football League champion Chicago Bliss.  She is one of the most focused, determined and hard-working people I have ever had the pleasure to know.  I have watched her develop as a player and am privileged to call her a friend.
I have seen DC pose with many fans and sign a ton of autographs.  I have several pictures with DC and each one represents a memorable event, like our first interview way back when in the end zone at the Sears Centre (their old home field).  I always think it is cool when celebrities take and post pictures with their favorite celebrities.
I don't know the specifics of this photo.  I wonder if Herrmann knew the football greatness who was standing next to him.  I am sure if he talked to DC for just a minute, he would know the great person she is though! 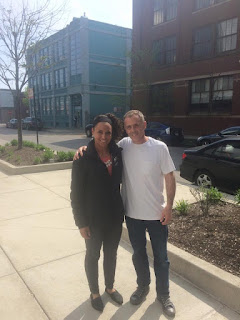 Dominique Collins and Christopher Herrmann in Chicago, IL-May 2015.
Posted by Johngy at 6:00 AM