Resistance Pro put on another great show.  "Split Second" was a little bit different though.  It had the usual great matches, but several interesting things happened.  For a recap of the mat action, check out my story on TruSchoolSports.com at On the Beat at Resistance Pro's "Split Second."
Today, I want to feature Leva Bates.  It's no secret that I am a big fan of RPro's Women's division.  Their matches are often "Match of the Night" material.  The women are athletic, tough and charismatic.
I am generally not a huge fan of bringing in bigger names for one match.  The wrestler comes in and puts on a great match, but there is nothing behind it.  I'd rather see someone else in the company get a spotlight match.  Leva Bates at "Split Second" is one of the exceptions.
Bates has wrestled for Shimmer, TNA, the WWE and other organizations.  In addition to her great wrestling ability, she is known for her use of cosplay for her outfits.  "Blue Pants" came with an impressive resume, like a lot of wrestlers.
The difference in Bates is intangibles.  She has such a great personality.  She eagerly posed for pictures and signed autographs before and after the show, as well as intermission.  She talked at length with her fans.  She even joined her fans in big group pictures.  In short, she went way above and beyond the call of duty and she did it all with a smile.
Inside the ring, she was all business, but still looked to be having fun.  Crazy Mary Dobson (her opponent) and Bates had a mutual respect, even sharing a gimmick table, but they battled it out in the ring and gave the fans an exciting match.
I think Bates has a brilliant future.  Her and Crazy Mary will be battling each other down the line in the WWE at some point.
This is just another example of RPro getting it right.  Choosing the right incoming wrestler is not easy.  RPro hit a home run with Bates. 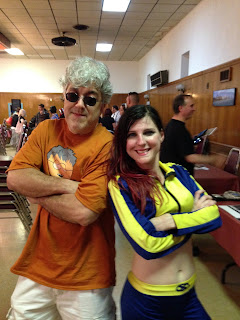