Athletes get trading cards.  Why not celebrities?  At least celebrities wearing athletic jerseys should get cards.  I am doing my best to create cards for jersey-clad celebs.  Today, we salute two great actors, who happened to appear together in Shall We Dance? and Arbitrage.

Richard Gere is a native of Philadelphia, PA, but that did not stop him from repping the jersey of the nearby Baltimore Orioles.  Gere would have fit in well with the dashing Jim Palmer of the early 70's.  The blurred wall behind him on his Celebrity Jersey Card fits well with the 1974 feel of the card. 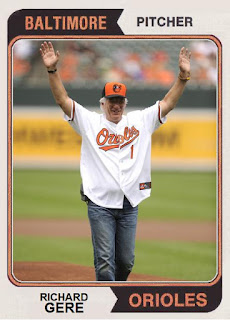 A native of New York, Susan Sarandon went down the east coast to show some love for the Rays on her Celebrity Jersey Card.  The rolled up sleeves are reminiscent of Ted Kluszewski.  Once again, we had to bend the time=space continuum to have Sarandon appear on a Rays card which would have come out about 25 years before the team existed. 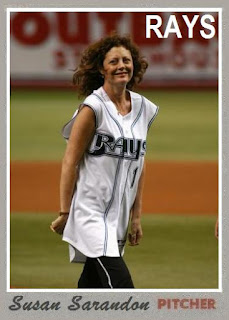