Here is my buddy Pete Richmire again, but this time he is not pictured with a beautiful woman for once.  He is still rubbing shoulders with some Seattle stars, though.
Richmire is a busy guy.  When he is not running the game day operations for the Seattle Sounders women's soccer team, he is probably hobnobbing with the celebs of the Pacific Northwest.
Pete met former Seattle Seahawks offensive lineman Max Unger a few years ago.  Because Unger is wearing his helmet, I figured it was a shot from training camp (which it was).  I told you, Richmire is a busy guy.
Since this picture, Unger has been traded to the New Orleans Saints.  Fortunately for Seattle sports fans, Richmire is still out in Washington.
Richmire and I worked together way too briefly for the LFL360.com.  Hopefully, our travels will allow us to hook up again for drinks at least.  We have some catching up to do.  I wouldn't mind it though, if Richmire brought one (or several) of his usual beauties. 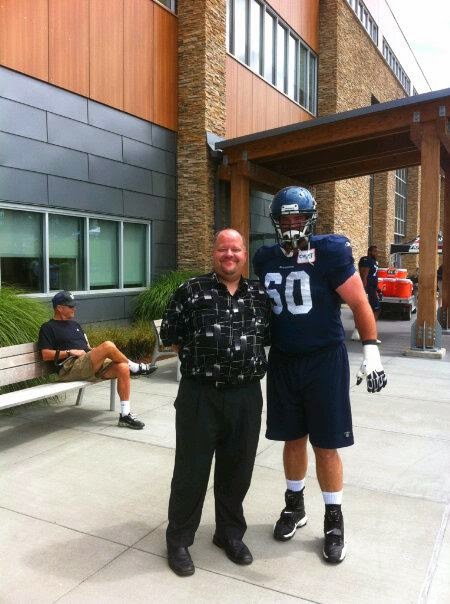