I have been covering the Chicago Bandits for a couple seasons.  Last season, I had the pleasure of meeting Alisa Goler.  My interview with her can be found at On the Beat with Alisa Goler.
The former Georgia Bulldog, Goler now plays for the Pennsylvania Rebellion.  It was in PA, that Goler met Pete Rose.
I love this picture.  It represents all that is good in sports.  Rose is an all-time great (despite the controversies).  Goler got the picture with Rose and proudly put it up on social media.
It is great to see a player like Goler pictured with a baseball legend.  It is great to see she is not jaded and still gets a thrill out of meeting sports legends.  It speaks of innocence and dreams and respect.  It is one simple picture, but it says a lot to me.
Of course, you might think that maybe Goler just took a picture with a celebrity, but I seriously think it is my original thought.  If you listen to that interview, you will hear Goler is a true pro and has respect and appreciation for sports.  I am pretty sure Rose would not be just another photo for Goler.
I wish Goler a lot of luck this season and beyond (well, except when she plays against the Bandits).  I think big things are ahead for her. 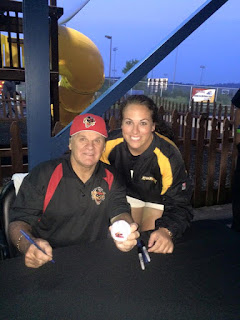