The Chicago Bliss is getting major national exposure via Pretty.  Strong., the docu-series airing on the Oxygen Network.  On Episode two, I got a bit of exposure, too.
I have given my thoughts on Episode Two in my piece for Tru School Sports at Pretty.  Strong. Episode Two Recap and Review.  Basically, in fairness to all involved, I have switched my perspective on the show.  I cannot judge it as a 50 year old football fan, who happens to like beautiful, athletic women.  They are not aiming the show at me and therefore, I have to judge Pretty.  Strong. by different standards.
One of my criticisms either way though is that all of the Bliss players are not really included in the show.  I understand they cannot focus on 20 different players.  Featuring eight is fine, but not at the exclusion of the others.
Where is Dominique "DC" Collins?  She has been on the team for three years, including two championship seasons.
Where is Kim Perez?  Where are the rookies?  The team is twenty-strong.
If they want to feature the Bliss Eight outside of football, why not at least include the others on the field.  Through two episodes, I don't think any others have been named or have spoken.  Some have been shown in quick passing, but only as the backdrop during game day action.
Oddly, while watching Episode Two, I was surprised to see myself.  The camera started on Head Coach Keith Hac, Coach Myron Knox, Team Photog Norm Cook, Johngy's Beat photog Jack Keenan and me on the sidelines at a practice.  One of the players came up and started talking to Hac.  Suddenly they were behind me and I grabbed center screen.
My screen time lasted about 5 seconds, which is five more seconds than I thought I would ever get.  They did blur my logo, even though it was unnecessary, since I own the rights.  I won't complain about that though.
My friends and I got a kick out of this, which goes right back to my point.  If I enjoyed seeing myself on Pretty.  Strong. and I only cover the team, I am quite sure the other players would love to be seen on the show as well.
It's not just for them individually, however.  It's about the team.
I am hoping this changes in future episodes.  I'll keep watching.  Maybe I'll even see myself again. 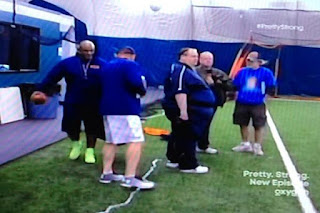 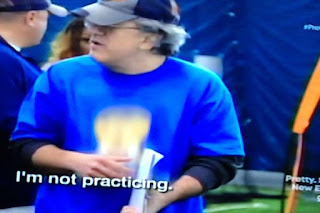 You are a TV star!

We can say we knew you when :)