In Heaven Can Wait, Warren Beatty played Joe Pendleton, a quarterback for the Los Angeles Rams who died too early and came back in the body of a recently murdered millionaire.  Beatty was a major player on the Hollywood scene back then.  His Celebrity Jersey Card merits extra points for including a helmet and also for the old school Rams look.  Just for the record, the #16 was once worn by Ron Jaworski during his time with the Rams.  Heaven Can Wait came out two years after Jaws left for Philly. 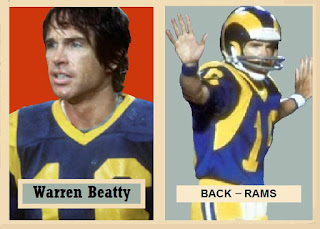 Velvet Sky appears again to represent the Rams for a Celebrity Jersey Card.  Despite my preference of the old school Rams look, I don't have any problems with Velvet's look.  I don't think that is the proper form for holding on a field goal, but again, I won't complain.  Her #81 might be for wide receiver Torry Holt, who spent ten seasons with the Rams.  I think Beatty would like to be paired with Velvet. 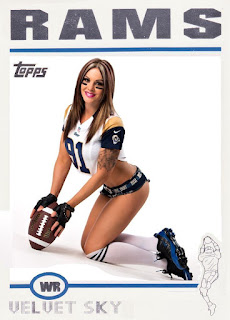