Sir Ian McKellen, born in Burnley, Lancashire, England, carved out a legendary career as an actor.  Not only are his credits too lengthy to list, his awards and honors would fill a page or more.  For his Celebrity Jersey Card, several things stand out.  First, the Denver Broncos were not in existence when this card would have been produced.  Second, he is wearing the most recent Broncos jersey as opposed to an older one more appropriate to the card's era.  Lastly, he is holding a soccer ball.  This would be the first soccer ball appearance on a Celebrity Jersey Card. 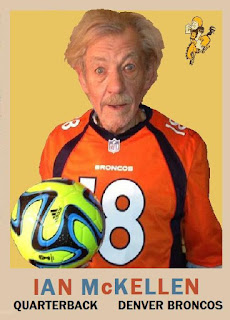 Like Sir McKellen, Velvet Sky models a #18 Peyton Manning Broncos jersey for her latest Celebrity Jersey Card appearance.  Given my mancrush on Manning, one must wonder who I think wears it better, Peyton or Velvet.  (No disrespect to Sir McKellen, he would finish 3rd). 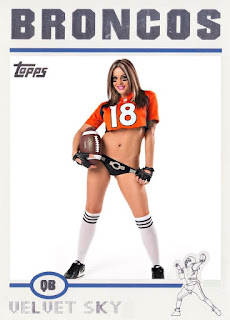