There he is again with some beauties.  Pete Richmire is the man!  He is all over the Seattle area sports scene and he is often seen with lovely ladies.
Such is the case again today.  There he is, surrounded by some Sea-gals (aka Seattle Seahawks cheerleaders).  Once again, I am envious of Pete.
Once upon a time, Pete was my "boss" on the LFL360.com site.  He moved on to bigger and better things.  As I have also left LFL360.com, I am hoping to follow in his footsteps.
Granted the Chicago Bears are one of a few times with no cheerleaders (they dropped the Honey Bears after the 1985 season and have not won a Super Bowl since.).  It might be tough for me to meet NFL cheerleaders, but Pete is my role model and I will do my best to follow his lead.
Viva La Richmire! 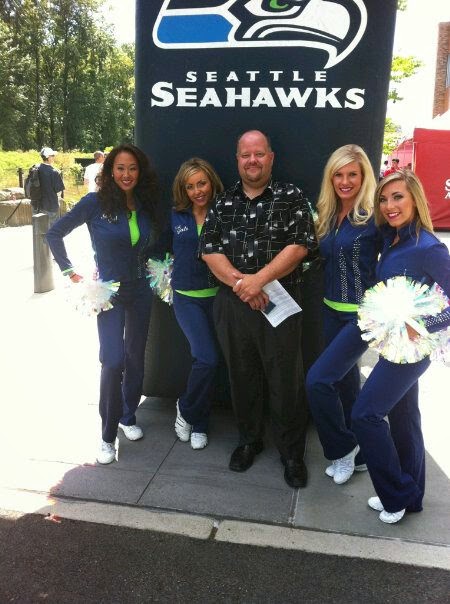 Pete Richmire and the Seattle Seahawks Cheerleaders in Seattle, WA-August 2011.
Posted by Johngy at 6:00 AM