This is a regular series in which I attempt to combine my lifelong passion for sports trading cards with my semi-professional interest in celebrities.  Today I feature some musicians to chase away the mid-winter blues, although they are not blues musicians)

Chicago area native Eddie Vedder is often seen sporting a Cubs jersey at Wrigley Field.  For this Celebrity Jersey card appearance, Vedder betrays his hometown Blackhawks in favor of the Minnesota Wild.  This causes one of those time-space continuum problems, as the Wild were not around when this particular hockey set was produced.  As always though, these are my creations and my rules. 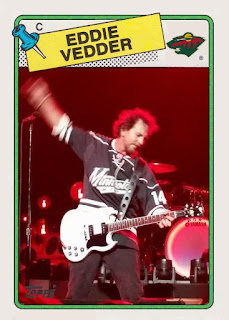 New Zealand born Keith Urban became a country music star.  If that wasn't enough, he married Nicole Kidman.  I will give him credit for rocking the old school Vancouver Canucks jersey for his Celebrity Jersey Card.  I am guessing it is #33 for longtime Canucks star Henrik Sedin. 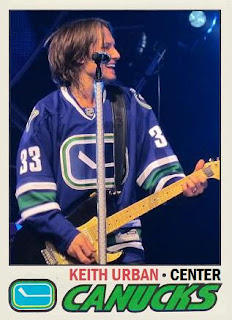