Wayne Gretzky is one of the all-time great athletes coming from Canada.  The Great One owns too many hockey records to list.  He rose to superstardom with the Edmonton Oilers, but for his Celebrity Jersey Card he repped his home country Blue Jays, seeing as their is no MLB team in Edmonton.  Gretzky's son Trevor is currently in the Los Angeles Angels' organization.. 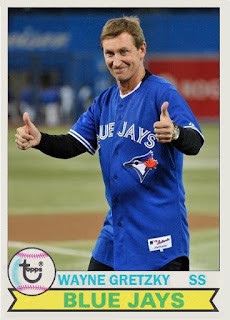 Like Gretzky, Bret Hart is considered a Canadian treasure.  Hart is probably the most accomplished pro wrestler from Canada.  He certainly is one of the proudest Canadian wrestlers.  For his Celebrity Jersey Card, I listed him as a Designated Hitter, which seemed appropriate for "The Hitman." 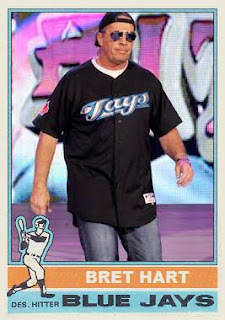