Our #SuperFriend David Herro is everywhere and with so many superstars of wrestling.  At the recent Cauliflower Alley Club event in Las Vegas, David was at it once again.
From his wrestling promotion, television appearances, podcasts and more, the Pride of Wisconsin is as recognizable as many of the wrestlers.  As I have written many times, David does all of this with his son Kal.  It's heartwarming to see the father-son bond.
David is hosting the SuperFriends Fan Fest on Saturday, May 7 and Sunday May 8.  It will be two days filled with wrestling superstars and fans interacting with each other.
Among the legends appearing will be Bobby "The Brain" Heenan, "Mean" Gene Okerlund, "Mr. Wonderful" Paul Orndorff, "Cowboy" Bob Orton, Kevin Nash, Scott Hall and Sean Waltman.  Active wrestling stars, ODB, Velvet Sky, Angelina Love, Thea Trinidad, Melina Perez, Ricardo Rodriguez, Katie Forbes and more.
No, I did not forget Al Snow.  How could I ever forget Al Snow?  Aside from him "punching" me every time I see him, I always enjoy his wit and wisdom.
You can get all of the info, including prices and schedules at the SuperFriends Fan Fest website.  Tell David Johngy sent you. 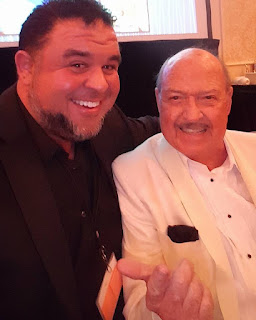