Kerry Wood was a phenom with the Chicago Cubs, but his career was derailed by injuries.  Still, he is a beloved figure in Cubs history and often seen around Chicago.
Bridget McDonnell made the Chicago Bliss as a rookie and helped them win their second straight Legends Football League championship.  BMac has moved on from the Bliss, but she has remained active on the Chicago sports scene.
The two met at Joe's on Weed Street.  I wonder if Wood knew he was meeting a champion?  More importantly, I wonder if he knew he was meeting a veteran who has served our country well?  With all due respect to Wood, BMac is the true star in this picture.
Thank you for your service, Bridget and thanks for being a friend. 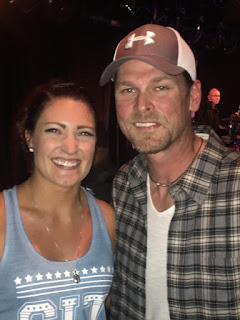 Bridget McDonnell and Kerry Wood in Chicago, IL-May 2016.
Posted by Johngy at 6:00 AM