I met Glen Rylko at Resistance Pro, but I am pretty sure our paths crossed at other wrestling shows and comic cons prior to RPro.  Glen has met some interesting celebrities from all sorts of areas.
Earlier this year, Glen met White Sox reliever David Robertson.  Robertson is a star relif pitcher, who has not gotten enough chances to show his abilities with the Sox.  Hopefully, Robertson will be part of the team as it rebuilds into a winner.
Glen has quite a collection of old wrestling programs and White Sox stuff, too.  I'm always happy to feature Glen here and I always enjoy seeing him in person.  He's one of the good guys. 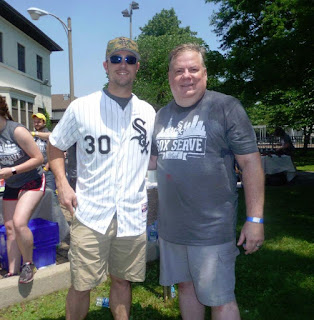 David Robertson and Glen Rylko in Chicago, IL-June 2016.
Posted by Johngy at 6:00 AM