Born blind in Puerto Rico, Jose Feliciano mostly grew up in New York.  He has an impressive resume, but my favorite will always be the "Chico and the Man" theme.  Feliciano has performed the National Anthem many times and probably has worn several jerseys doing so, but for this Celebrity Jersey card, he is with the Detroit Tigers. 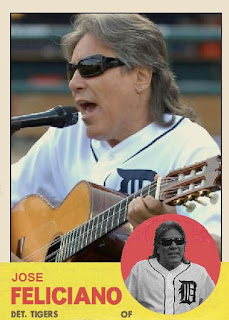 Jim Harbaugh was born in Toledo, Ohio, but his heart seems to be in Michigan.  He starred at the University of Michigan and has since returned as the Head Coach of the Wolverines.  I think he was vastly underrated during his NFL career, but he seems to be getting his props as a coach.  I also think he could have been a pitcher, as his Celebrity Jersey Card suggests. 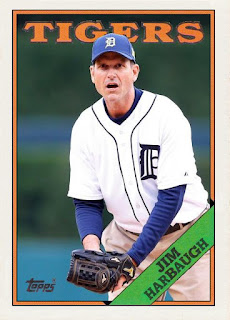