Joshie Watko is the genius behond JW's Wrestling Memorabilia, a fantastic site featuring a ton of awesome wrestling stuff, including many in=person encounters.  The site is a showcase of Josh's knowledge and respect for wrestling and its' history.
Josh also has met many celebrities outside of the worl d of wrestling.  At a Wizard World earlier this year, he met a legendary Batman trio consisting of Adam West, Burt Ward and Julie Newmar.
I'm not a curmudgeonly old man.  I like the new Batman movies, but I will always have a special place for the coolness of the old Batman television series.  Maybe it recalls my childhood.  Maybe it is romanticized over time.  Maybe it is just the simplicity of the series.  Whatever the case, that Batman will always be my favorite.
I have met Newmar and West, but not yet Ward.  A picture with all three is so cool.  While I have had a couple encounters with West which left me disappointed, I'd still love to be involved in such a group photo.
Josh is a great guy and I hope to meet him one day.  If this happens, I am sure it will be at a wrestling show or comic con.  Maybe it will happen in 2017.
In the meantime, I encourage everyone to check out JW's Wrestling Memorabilia.  There is just so much great stuff on his site.  He has new and old merchandise info, reviews, pictures, stories and more.  He even has his own awards, The Joshies.  I'm not going to lie.  I am dying to win a Joshie.  Dare I dream? 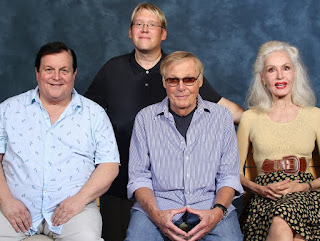