Tracey Gold starred as Carol Seaver for years on tv's Growing Pains.  While I would love to have been a tv star, it had to be tough growing up on tv, like Tracey did.
In high school, she suffered from dyslexia.  During the show's run, she battled anorexia.  After the show, she had a DUI charge.  Each is challenging enough without every detail being reported by the press.  Tracey and her family stood tall and survived.
I met Tracey (and her husband Roby Marshall) at several years ago.  Tracey seems to be doing great now.  We talked about her struggles and her perseverance.  She looked great and sounded very relaxed and happy.  As a side not, her husband doubled as the photog for the picture below.
In about a month, at Rewind Con I will be meeting Tracey again.  Rewind Con will have over 75 stars of the 80's, 90's and beyond.  The celebrity list is crazy good.  You can read all of the details in my story on the Patch at Rewind Con Is Coming.  I am looking forward to seeing Tracey and so many other of my favorites.  I know I will be on overload. 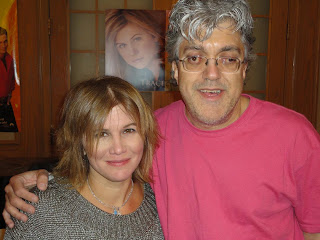 Looks like Rewind Con will keep you busy with all the TV stars from the past! Nice to see these stars are doing well ... have fun!