This is a regular series where I create virtual trading cards for celebrities wearing sports jerseys.  Today, we feature the matchup of the Chicago Bears and the Tennessee Titans.

When we last saw Ed O'Neill on a Celebrity Jersey Card, he was wearing a Kansas City Chiefs jersey.  More fitting, today we have him with his character Al Bundy's hometown Bears.  We all know Al scored four touchdowns in a game.  His #33 would be closer to running back Jim Grabowsjki, but it was wore more famously by the recently retired Charles "Peanut" Tillman. 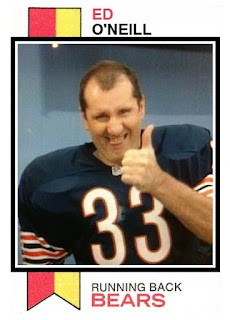 If you were a fan of Married With Children, it seems appropriate that O'Neill would be juxtaposed with Velvet Sky.  If you weren't a fan of MWC, enjoy the Velvet picture anyway.  She is wearing #10, which has an interesting history with the Titans (and Houston Oilers).  Craig Bradshaw (Terry's brother) wore it for his one season with Houston.  Oliver Luck, father of Andrew, wore it for four seasons with the Oilers.  Most notably, Vince Young wore #10 for his five seasons in Tennessee.  I'd still say Velvet wore it best! 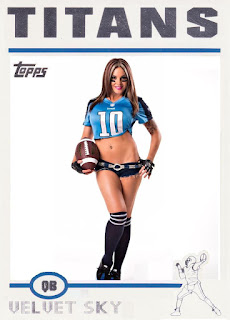 Couple of good ones!