This is a regular series where I create virtual trading cards for jersey-clad celebrities.

Adam "Edge" Copeland was born in Canada and lives in North Carolina, but somehow, he is a fan of the New Jersey Devils.  Then again, so is my friend JayHawk Evans, but I digress.  He retired from wrestling early because of injury, but he had already started acting.  The WWE Hall of Famer really earned his Celebrity Jersey Card by sitting with the public at game. 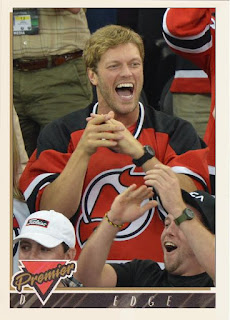 Former wrestler April Hunter was born in Philadelphia, but she earned her Celebrity Jersey Card while wearing a Boston Bruins sweater.  I won't argue that, although the fans of the respective rival teams might.  I also don't know the significance of her #55.  Only eight players have worn that for the Bruins, with Johnny Boychuk as the most notable. 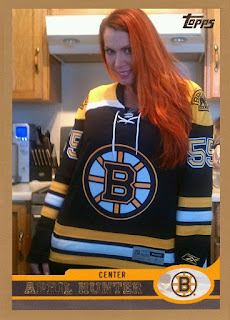