This is a regular series in which I create virtual trading cards for jersey-clad celebrities.

Carol Elaine Johnson was born in Manhattan, NY.  She rose to fame on the screen and stage as Whoopi Goldberg.  She donned a San Antonio Spurs jersey for a segment on The View, a show she has co-hosted since 2007.  While I am not a fan of a collared shrit under a jersey, I do appreciate the opportunity to create an NBA Celebrity Jersey card. 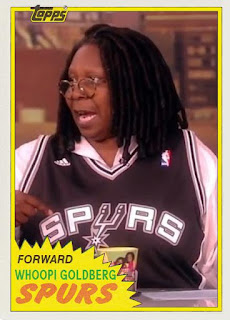 Elizabeth Hasselbeck was a co-host on The View from 2003 to 2013.  A native of Cranston, RI, she is married to former NFL quarterback Tim Hasselbeck (who has appeared on his own football cards).  Like her former View partner, Hasselbeck earned her Celebrity Jersey Card for a show segment.  She gets extra points for having a basketball! 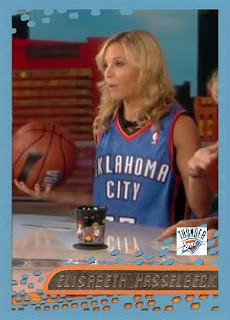