When did Mick Foley's little girl Noelle grow up?  How did Mick Foley even produce such a beautiful girl?  I'm infringing on Al Snow territory there.
I remember Noelle when she was a toddler.  I have been friendly with Mick for many years and he always spoke so lovingly of his family.  I remember seeing pictures of all of his kids (three sons and Noelle).  Mick always seemed to have his priorities straight.
All of a sudden it seems the kids have become adults.  Noelle has done some work in the entertainment industry.  She did some reporting work at C2E2 last year and I was lucky enough to run into her for a photo.
Mick has been a fan of women's wrestling and has worked for equality within the business.  This is especially significant now that Noelle has started to work towards becoming a wrestler.  I'll be following that story as it develops.
I salute Noelle for pursuing her dream.  I also applaud Mick for being a great dad above all.  Mick seems to have survived and even succeeded after retiring from in-ring activity. 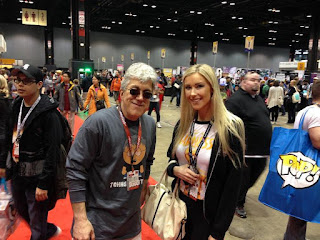