This is a weekly series freaturing celebrities wearing sports jerseys.

Actor David Boreanaz is perhaps best known for his role as "Angel" on Buffy The Vampire Slayer.  An earlier role of his was as Kelly Bundy's unfaithful boyfriend who gets beat up by papa Al on Married With Children.  Boreanaz has played some hockey for fun and charity.  He earned his Celebrity Jersey Card by wearing the jersey of the Los Angeles Kings during one of those games.  Thus, he gets extra points for the helmet and gloves! 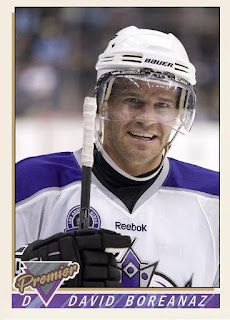 Actor Kiefer Sutherland was born in London, but moved to California and then Toronto as a youngster.  He is quite comfortable on skates.  A Canadian citizen, Sutherland earned this OPC (Canadian) Celebrity Jersey Card when he wore the Vancouver Canucks sweater on the ice.  His #11 might have been for NHL Hall of Famer Mark Messier. 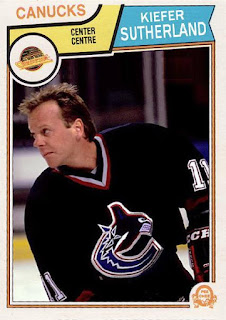