Celebrity Jersey Cards is a weekly series in which I create virtual trading cards for celebrities seen wearing sports jerseys.  With WrestleMania around the corner, I am featuring some champions sporting hockey jerseys.

WWE Hall of Famer "The Heart Break Kid" Shawn Michaels made an appearance at a Pittsburgh Penguins game to introduce the line named after him.  The "HBK Line" of Carl Hagelin, Nick Bonino and Phil Kessel lead the Pittsburgh Penguins to the Stanley Cup last season.  Joining him on his Celebrity Jersey Card is broadcaster Scott Oake. 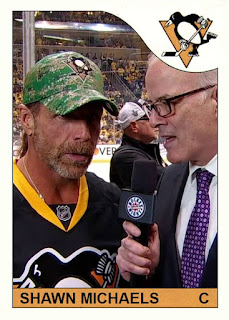 Continuing the relationship between the WWE and the Penguins, the HBK Line of Hagelin, Bonino and Kessel compared championship belts with then-WWE RAW Women's champ Sasha Banks.  WWE owner Vince McMahon had previously gifted the Penguins with a special title belt for their Stanley Cup championship.  This Celebrity Jersey Card has three Cup champs, a wrestling champ and two title belts!  Banks, born Mercedes Kaestner-Varnado in California, is a first cousin to Snoop Dog and has won the RAW Women's title three times and the WWE NXT Women's title once. 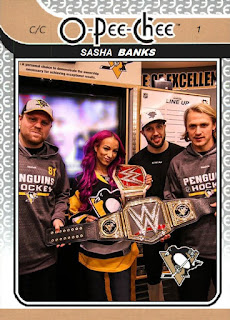