I met Matthew Pike when he joined the Chicago Bliss (of the Legends Football League) as the Quarterback Coach.  Coach Keith Hac takes it that seriously, which is why the Bliss has won 3 of the last 4 LFL titles.
Matthew was a welcome addition, especially as the Bliss transitioned from the legendary Heather Furr, who retired after the 2015 season.  He worked with the new crop of quarterback prospects, before Aussie import Cinda Barclay won the spot.
Matthew quarterbacked the Purdue Boilermakers from 1991-93.  He completed 156 of 337 passing attempts for 46.3% for 2273 yards, with 12 TD's against 17 interceptions.  After Purdue, he signed as a free agent with the Dallas Cowboys, but left to play football in Europe.  He returned to the US to play indoors.
At a game last season, Matthew met Purdue legend and NFL Hall of Famer Bob Griese.  Griese starred for the Boilermakers about 25 years before Matthew lead the team.  In between were a solid line of QB's including Mike Phipps, Gary Danielson, Mark Herrman and Jim Everett.  None matched the achievements of Griese, but all were excellent at Purdue and went on to have solid NFL careers.  Of course, after Matthew, Drew Brees would be the biggest name to lead the Boilermakers.
It has to be a cool feeling to be in that line of quarterbacks.  It's like a fraternity.  Even though his NFL career did not work out, Matthew had his time to shine at Purdue.  Now he has time to shine as he guides the quarterback on the 3 time LFL champion Bliss. 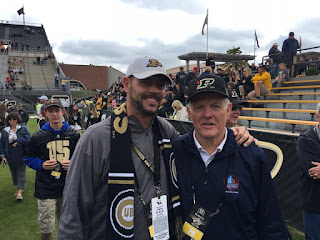 Matthew Pike and Bob Griese in West Lafayette, IN-October 2016.
Posted by Johngy at 6:00 AM