Cards That Never Were is a recurring series where I create virtual; trading cards for players who were missed in various sets.  It is a concept I have borrowed from too many to list, but I appreciate all of them.
Infielder Luis Alvarado made his MLB debut in 1968 with the Boston Red Sox.  He played parts of three seasons there, before being traded to the Chicago White Sox.  That was a big trade, as he was traded with Mike Andrews for Luis Aparicio.
Early in the 1974 season, he was traded to the St. Louis Cardinals, who traded him to the Cleveland Indians a month later.  Alvarado spent 1975 in the minors, but was traded back to the Cardinals organization in midseason.  After the 1976 season, he was purchased by the Detroit Tigers, then purchased by the New York Mets.  He started 1977 with the Mets, but was "returned" to the Tigers, where he finished out the season.  He finished his playing career in the Mexican League.
Topps gave Alvarado his first card in their 1970 set.  He split that "Red Sox Prospects" card with Billy Conigliaro.  He actually had more plate appearances in 1968 (49) than in 1969 (5), but Topps did not give him a card in their 1969 set.  He appeared on cards through the 1974 set, including that awesome 1973 card, which also featured some vehicles in the background.
In 1974, he appeared in 86 games, but was left out of the 1975 set.  His 16 games in 1976 and his 3 games in 1977 did not merit cards either, but that didn't stop me from creating cards for him for '75, '77 and '78.
For 1975, he appears with the Indians.  For '77, I gave him a card with the Mets, although he did join them in February, which might have been too late in reality.  Still, it would have been a cool card, because he never actually played for them in the majors.  For '78, I used a picture of him with the Tigers.  This would also be a career capper card.  Unfortunately, none of these cards show him with the Cardinals, but that's how it goes.  Actually, if I had a picture of him with the Cards, I would have made a 1977 Cardinals Topps card with them and a '77 OPC card with the Mets. 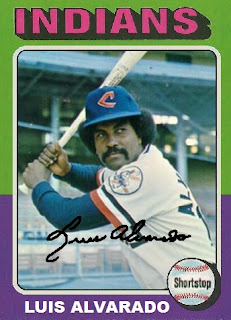 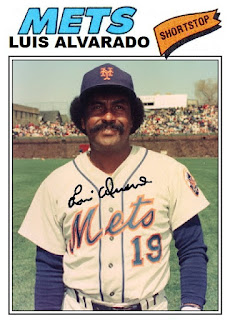 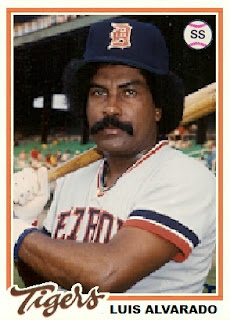 Great cards. Alvarado is a guy I collect because of his time in Boston