That Mark Bodek is really started to get on my nerves.  It's not enough that he hangs with so many wrestling legends.  He also hangs with other sports greats.
Actually, the DC area-based Mark is a great guy.  He's an avid fan of the Redskins and Nationals.  That's all great.  It's when he meets these stars that he raises my ire, but only because I'd love to be there.
A few years back, Mark met former running back Alfred Hayes.  That would be during his rookie season with the Redskins.  Hayes put together four excellent seasons there and finished with one season of limited action with the Dallas Cowboys.
Someday, I'd like to meet Mark.  I have never been to a game at Nationals Park.  That would be a great place to catch a game and meet the legend himself. 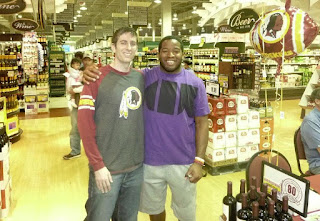 Mark Bodek and Alfred Morris in Reston, VA-December 2012.
Posted by Johngy at 6:00 AM