My buddy Glen Rylko is a bit late for my "Mascot Week," but that won't stop me from running his picture, espceially since baseball season is underway.  Glen is a big fan of the White Sox and it has been evident in some of his previous appearances here.  This time, he is featured with Southpaw, the newest mascot of the Sox.
Southpaw debuted in June of 2004.  I don't know what exactly Southpaw is.  Maybe nobody knows.  Maybe he isn;t anything specifically.  He might just be a bigm, fluffy generic mascot.
Anyway, he is an improvement over the Sox mascots of my youth.  As mascots started popping up everywhere, the Sox created Ribbie and Rhubarb.  I guess they were popular with the really young folks, but nobody else seemed to care for them.  Then again, most grownups don't care for any mascots.
I do have an appreciation for mascots though.  Any company can toss out some poor guy in a goofy, nondescript mascot costume, but a well-crafted mascot with a talented person inside can actually be entertaining and charming.
On the other side, Glen might say he is charming and entertaining.  I can't argue that.  He is a good guy and we cross paths at various comic cons and wrestling events.  Those events don't usually have mascots though.  They don't need them.  There are already anough characters present. 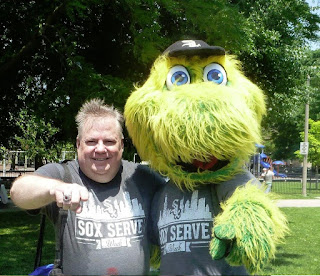