Twelve-time Olympic medalist and former world record-holder, Dara Torres made a name for herself in competitive swimming.  She is one of only a handful of Olympians to earn medals in five different Olympics.  DT was born in Beverly Hills, CA, but earned her Celebrity Jersey Card from her ceremonial pitch with the Diamondbacks. 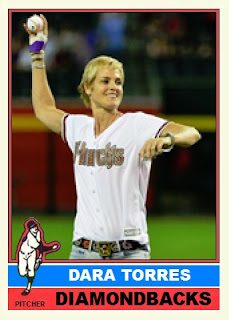 Born in Jacksonville, FL, Barbie Blank rose to stardom as "Kelly Kelly" in the world of pro wrestling, where she won the Divas title once in the WWE.  She is not officially done with wrestling, but she has moved on to other things such as the reality television show WAGS.  Blank gets extra points for wearing a cap on her Celebrity Jersey Card, even if it is backwards. 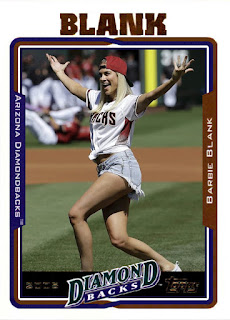