Once again, we feature my friend Josh Watko from JW's Wrestling Memorabilia.  Josh is a great guy who meets lots of celebrities.  His website is full of great wrestling pictures, stories, reviews and more.  It is an entertaining romp through the world of wrestling.
Despite his site being focused on wrestling, Josh has met a lot of stars outside of wrestling.  One such celebrity was Johnny Whitaker, the lovable former childhood actor best known for his role as Jody on tv's Family Affair.  Whitaker also originated the role of Scotty Baldwin on tv's General Hospital and later starred on Sigmund and the Sea Monsters.  That's a pretty impressive resume for a young actor.
Unfortunately, his acting career did not flourish after that.  Fortunately, Whitaker seems to have avoided the pitfalls often associated with young actors.
I met Whitaker years ago and he was very fan-friendly and happy to discuss any of his roles.  He seemed proud of his past and content wth his present.
Josh's site is very cool, but I would love to see him expand it to include thse non-wrestling stars.  He's got plenty of pictures and interesting stories.
Despite knowing Josh for years, I ahve never met him.  I imagine that will happen at some event sometime.  That won't stop me from featring him here though.  He just has so many great pictures. 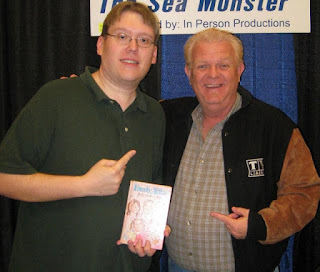