On the Beat With Megan Blank of the Chicago Bandits 2017

We are very excited to be back "On the Beat" with the National Pro Fastpitch defending champion Chicago Bandits for the 2017 season.  Actually, the Bandits are back-to-back defending champions.  Our coverage starts with Megan Blank.
Megan had a great career at Iowa.  Among other awards, achievements and records, Megan was a 4x All-Big Ten First Team selection.  The California native signed with the Bandits after an open tryout in May of 2015.
In her rookie season, Megan showed her versatility by playing games at DH, RF and 1B.  Of course, she also showed offensive promise, hitting .258 with 3 home runs and 14 rbi's.
Her second season was even better, although she started off a bit slowly.  Megan turned it on by midseason, finishing with an average of .285, with 3 home runs and 21 rbi's.  She also logged game time at 1B, 3B and RF.
Along with watching Megan up close in Chicago over the last two seasons, I had the pleasure of seeing her in action in Akron on a road trip last season.  Megan had a great game and I landed her for a post-game interview.  That was one of the summer highlights for me.
In just two short seasons, Megan has become a team leader and a fan favorite.  I have seen her sign dozens of autographs for young fans after games.
Her family is very supportive of her and the Bandits...and me!  During my last two interviews with Megan, I mentioned her Iowa bobblehead.  I had been scouring the internet for one, but I was so pleasantly surprised when Megan's father messaged me and offered one to me.  That bobblehead proudly stands on my bookshelf.  Once again, I send out thanks for that gift.  It was so very cool to receive it. 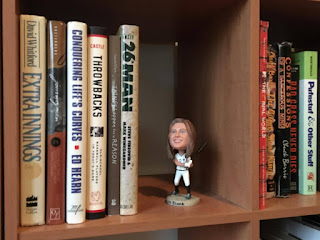 Recently, after pre-season practice, I interviewed Megan (our first of the season!).  We talked about her winning two championships in her first two seasons.  Coincidence?  I think not.  Megan was a big part of the success of the Bandits and will be going forward, especially as the team progresses through the current transition period.
We also talked about her big in-season turnaround last year.  In mid-June, she was hitting .031, but she never gave up and brought her average all the way up to .281.  That is an amazing comeback and is testament to her ability and determination.
Can you tell I am a fan of Megan?  Every team needs a player like Megan.  The Bandits and the fans here are lucky to have her.
Below is our interview with Megan.  Check the Johngy's Beat Chicago Bandits playlist on YouTube for all of our interviews with the Bandits!  Keep checking Johngy's Beat for recurring coverage of the Bandits this season and go to ChicagoBandits.com for more info on the best team around.
Thank you to the Chicago Bandits organization for their hospitality.  Thanks to Megan for her time and consideration now and always and for her part in bringing two NPF titles to Chicago!  Lastly, thanks to Megan's parents for that awesome bobblehead!
Posted by Johngy at 6:00 AM

Great story .... just love how her parents are there for her all the way!!
Good luck Megan!!

Clutch hitter. Can't wait to see her play in 2017. Her walk-off in last season's home finale versus USSSA Pride was an all-time Top 5 moment in Bandits history. Good luck this year Megan!! PS - Any more of those bobbleheads left? Would love to add that one to the collection!!! Great job as always John.