Josh Watko is the creative force behind JW's Wrestling Memorabilia, the best of wrestling memorabilia and memories.  The site is filled with great wrestling stuff, but Josh is not a one trick pony.
Josh attends a lot of comic con or celebrity appearances in his area.  At one such show, he met singer Debbie Gibson.  Josh's comment on his picture was "Debbie Gibson and I...two '80s icons and we're still hot as Hell."  He is quite the kidder.
I have to agree with him about Debbie.  She still looks great.  Even when I saw her up close at a different event, I thought she looked great.
Sorry Josh, I like you and all, but I can't compare you and Debbie.  On the other hand, Josh runs a much better website that she does. 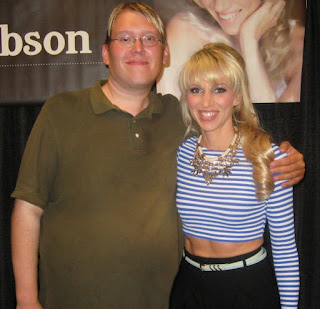