I first met Gabe Baron at the debut show for Resistance Pro several years back.  From that first day, Gabe made me feel like part of the RPro family and I have enjoyed knowing him, his family and the entire RPro gang.
Gabe is a great friend.  I admire his family dedication and his overall attitude.  If you are lucky enough to be Facebook friend with Gabe, you will see many pictures of his wife and two daughters.  I always get a warm feeling when I see these pictures.  They are so loving.  He represents everything you'd want out of life.
Oh sure, he has a quick and often offbeat wit, but that just adds to the experience of knowing him.  He also has an affinity for sitcoms from the 1970's, but that's right up my alley, too.  It would be a blast to watch a '70's sitcom marathon with him.
Gabe and his brother Jacques have been to many Days of the Dead events in Schaumburg, IL.  At the 2014 DotD, he met Chris Sarandon, the voice of Jack Skellington among other acting roles.
I know Gabe loves meeting his favorites at these events.  I have had the pleasure of facilitating a few photo opportunities for Gabe and I couldn't have been happier to do it for him.
I truly like and respect Gabe and I am proud to call him a friend.  I'm loking forward to seeing him (and some celebs) at the next convention. 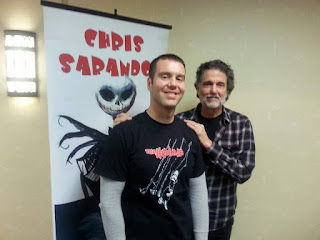 Gabe Baron and Chris Sarandon in Schaumburg, IL-November 2014.
Posted by Johngy at 6:00 AM