I first met Mark Pandocchi at a Chicago Bandits game.  A staunch fan of the team, Mark is an original member of Bandit Nation.  He is also very active promoting the team on Facebook and helping to coordinate tailgate parties at the Ballpark in Rosemont.
Mark is a good guy and exactly the type of fan you'd want.  He continually supports the team and is a friend to all at the Ballpark.  He often shares my interviews and I appreciate that greatly.  It's fans like Mark who have accepted and embraced me into Bandit Nation, who make this such a wonderful experience.
The picture below is from a banquet the Bandits had in 2015.  It was cool to see the ladies in regular wear, as opposed to the uniforms for a change.  It was also good to see Mark spiffing up for the event.
He picked a couple pretty good players to sandwich him in the picture.  Tammy and Amber were two great players who retired after the 2015 season.  Tammy at shortstop and Amber at third base handled the left side of the infield t perfection.  It was always a pleasure watching (and knowing) these two great lady athletes.
It's a bit unusual seeing Mark not wearing Bandits gear, but it's always good to see him.  There are still several games left and I am sure I will see him at the Ballpark again this season. 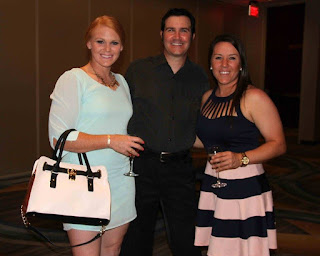 Tammy Williams, Mark Panocchi and Amber Patton in Chicago, IL-August 2015.
Posted by Johngy at 6:00 AM