For once, not only did I meet a celebrity who Glen Rylko met, I beat him to that celebrity.  I don't think Glen is keeping score though.  He's probably not as petty as I am.
Glen is a good dude, who I met at a wrestling show and who I have seen at many shows and conventions.  He also gets to meet many celebrities, often times ones I have not met.  Despite meeting hundreds of celebrities, it's always the ones I haven't met that sting when I see others with them, especially when they are favorites of mine.
Glen met Greg "The Bull" Luzinski and that would be one that would make me envious, had I not met Luzinski several years ago in Philadelphia.  Luzinski is a legend in Chicago.  He is a local kid, who starred for the Phillies and won a division title with the White Sox in 1983.  On my trip to see the Phillies, meeting Luzinski was definitely one of the goals and highlights.  Now, I can look at the picture of Glen and "The Bull" and not feel anything but happiness for Glen (and for Luzinski, too, since he got to meet Glen).
Friendly Encounters almost always have happy stories for those involved.  This one makes everyone happy, even me. 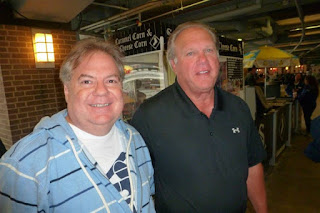