Carl Klimowicz was friends with my brother-in-law Scott before I knew either of them.  I met Carl completely independently at DePaul.  It was only later when we realized the connection.
Carl and I had some fun times during our years at DePaul.  Who could ever forget the debacle known as Speech Class?  Who can remember our last day celebration at My Pi pizza?  That day started at about noon and ended somewhere around noon (the next day).
I had the pleasure of standing up in Carl's wedding.  That was about 30 years ago.  Where does time go?
Speaking of time, the picture below stuns me.  How does Carl possibly have a daughter as old as Jen?  It seems just yesterday we were playing eraser basketball in an empty classroom.
Usually, I'd be upset that I did not meet a legend like Rick Nielsen, but I am too spun by time passing so quickly to even think about missing out on the Hall of Famer. 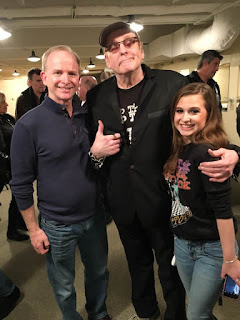 Carl Klimowicz, Rick Nielsen and Jen Klimowicz in Chicago, IL-March 2017.
Posted by Johngy at 6:00 AM