Once again, here is my friend Mark Bodek with another Washington DC-based celebrity.  As I have previously written, I have not had the pleasure of meeting Mark yet, but he has met a ton of celebrities.  Maybe I am not famous enough.
Mark is a good guy and a big sports fan.  He's the kind of guy you'd like to have with you at a sports event and the sports bar after it.  Of course, maybe he'd invite some of his celebrity friends, too.
Today, he is pictured with former Washington Redskins linebacker Brian Orakpo.  Mark met Orakpo during his time in DC.  After 6 seaqsons there, he has played the last 2 with the Tennessee Titans.
I joke about Mark, but I hope to meet him one day (with or without other celebrities).  A game between his Nationals and my Chicago Cubs would seem the perfect setting.  Unfortunately, I do not have a pln to go to DC this year.  Maybe Mark will venture out here for some reason and we can meet.  Either way, I'll keep following his exploits as he cheers for his teams and he meets more celebrities. 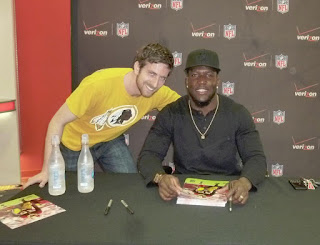