Cards That Never Were is a recurring series where I create virtual trading cards for players who were not given cards in particular sets.  It is a concept I have borrowed from too many others to list, but I appreciate all of them.
Jack Concannon played quarterback in the NFL from 1964 through 1975.  The first three years of his career saw Concannon get limited action with the Philadelphia Eagles.  He received a card in the 1965 Philadelphia set, but none in '66 or '67.
He joined the Chicago Bears in 1967 and stayed with the Bears through the 1971 season.  Concannon received cards in sets from 1968-1971, missing the 1972 set.
He was traded to the Dallas Cowboys and spent the 1972 and '73 seasons on the practice squad.  He joined the Green Bay Packers for the 1974 season and saw some action.  He finished his career in 1975 with two passing attempts for the Detroit Lions.  Understandably, Concannon did not receive cards in any of the sets covering these years.
I could not find workable pictures of Concannon with the Eagles for the 1966 or '67 sets, but I'll keep looking.  I created a Bears card for him for the 1972 set.  I could not find any pictures of him with the Cowboys, but I "cheated" a bit and made one for the 1973 set.  I created a card of him with the Packers for the '75 set, but came up empty on his Lions season for the '76 set.
In summary, I created Concannon cards for the 1972, '73 and '75 sets.  He is still missing cards for 1966, '67 and '76. 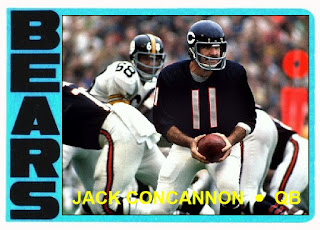 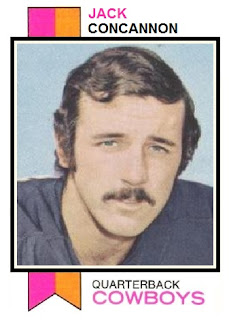 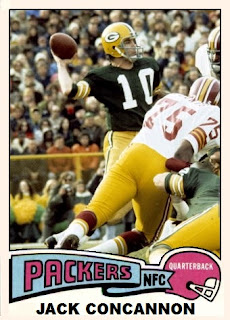 Jack's the first Bears QB I remember as a kid. Your 72 photo has a 70's TV actor vibe. My first thought was Patrick Duffy.