Cards That Never Were is a recurring series in which I create virtual trading cards for players who were missing in various sets.  It is a concept I have borrowed from too many to list, but I appreciate all of them.
Pitcher Steve Fireovid was drafted by the San Diego Padres in the seventh round of the 1978 MLB draft.  That was the start of a pro baseball journey which lasted sixteen seasons with nine organizations.
He made his MLB debut and pitched in 5 games with the Padres in 1981.  He spent '82 in the minors, but resurfaced with the Padres for three games in '83.  He pitched in six games for the 1984 Philadelphia Phillies, 4 games for the 1985 Chicago White Sox and ten games for the 1986 Seattle Mariners.  He spent a few years in the minors, before making it back to the majors for 3 games with the 1992 Texas Rangers.  He retired after spending 1993 in the minors.  Overall, he was 3-1 with a 3.39 ERA in 31 games.
For his efforts, Fireovid received one Topps card (1987) and one Fleer card (1987 shared with Rob Nelson).  I cannot argue with Topps not giving him any other cards, but I can create one for his time with the White Sox.  I did have to cheat a bit by using a picture of him with the Buffalo Bisons, but the uniform was close enough with some proper cropping.
On a related note, Fireovid authored The 26th Man: One Minor League Pitcher's Pursuit of a Dream. a book detailing his career as the guy not quite good enough to make the MLB roster.  It was an excellent book, which I highly recommend. 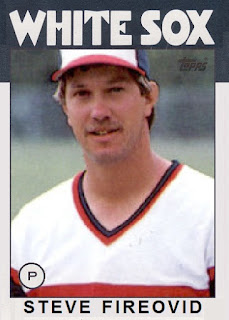 Looks like a terrific book. I'm having a hard time figuring out how to pronounce his last name.

It really was an interesting book. I believe his name is pronounced Fire-ovid, but he probably can't pronounce mine anyway.