Celebrity Jersey Cards is a regular series in which I create virtual trading cards for celebs wearing sports jerseys.  With the NFL season about half over, today we salute the two winless teams.

Born in Alabama and moved to Colorado as a teen, Condoleeza Rice went on to become the 66th United States Secretary of State.  For her Celebrity Jersey Card, she donned the #16 of the Cleveland Browns.  A handful of QB's wore that number, including Paul McDonald, Milt Plum and Bill Nelson, but I'm thinking her #16 might be for WR Josh Cribbs.  Rice would be old school, but she needs a little more star power, le Cribbs provides. 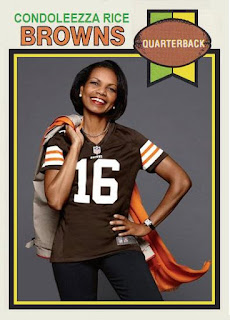 Actress, singer and songwriter Miranda Cosgrove was born in Los Angeles, CA and attended USC.  She was discovered at the age of 3 and has built an impressive resume despite her young age.  Perhaps her most famous role was as the title character in tv's iCarly.  She is a big fan of the San Francisco 49ers, which explains her Celebrity Jersey Card.  Her #52 hasn't been worn by many players of note, but I'll credit it to longtime linebacker Skip Vanderbundt. 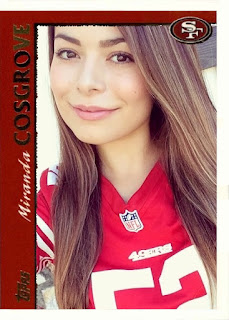