I met Ed Gonzales at Resistance Pro.  Ed is an independents wrestler and the husband of "Hardcore" Heather Owens.  They are a fun couple and two really good people.
They are also hard workers at Days of the Dead events.  Ed has ben a big part of Days bringing in big name wrestlers (much to the dismay of a handful of horror fans).  I probably shouldn't even give the small group any thought, but I like to point out the idiocy of their mindset.
They view horror cons as sacred.  How dare the Days people bring in wrestlers, who have no connection to the horror scene?  Wrestlers do not belong at horror cons.
I don't remember the first wrestler Days had in their celebrity lineup, but I remember thinking it was a great idea.  Now, many wrestlers, several years and thousands of happy fans later, that decision is completely justified, although there is still a small group who complain.
I get an extra kick when I see a wrestler announcement.  I know there will be some immediate backlash, but the majority of attendees will be happy.
Few people there are happier than Ed though.  He gets to work Days and to "handle" the wrestlers.  How cool is it to hang with Ric Flair, Roddy Piper or Bret Hart?  Ed has done that and more.
At the Days event in Indy this year, the legendary Sting was the headliner.  Despite Ed being his usual; busy self, he did make sure to get a picture with Sting.  Not seen in the shot are Ed's signature Zubaz pants.
Days of the Dead Chicago is next weekend.  The celebrity guests include Dee Snider, Jeremy Bulloch, Daphne Zuniga, Fairuza Balk and Sean Astin.  You can go to DaysOfTheDead.net for all of the info.  Johngy's Beat will there there all weekend, as will Ed, enjoying all of the fun! 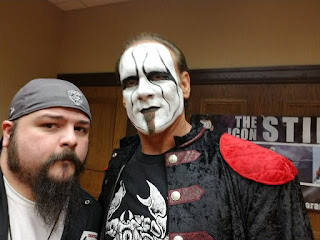 Ed Gonzales and Sting in Indianapolis, IN-July 2017.
Posted by Johngy at 6:00 AM