Celebrity Jersey Cards is a regular series in which I create virtual trading cards for celebs wearing sports jerseys.  Today, I feature my two favorite models from Deal Or No Deal, who wore jerseys for a special football edition of the show.

Born in the Soviet Union, Anya Monzikova moved to Florida as a youngster.  She moved again to Los Angeles to pursue a career in entertainment.  In 2006, she joined Deal Or No Deal as the model holding case #10.  For her Celebrity Jersey Card, she wore her familiar #10 on a Buffalo Bills jersey.  She is flanked by #15 Brooke Long and #26 Lindsay Clubine (the more, the merrier!).  Anya has also been pursuing an acting career and is building a solid resume of acting credits.  She is also on my Top 20 list of celebs I want to meet. 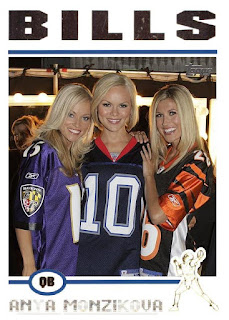 Patricia Kara was born in Chicago, IL and did some model work and acting before landing on Deal Or No Deal as the holder of case #9.  Patricia is repping the Texans and is flanked by #5 Ursula Mayes for her Celebrity Jersey Card.  I had the pleasure of interviewing Patricia years ago at Wizard World and she was a real sweetheart. 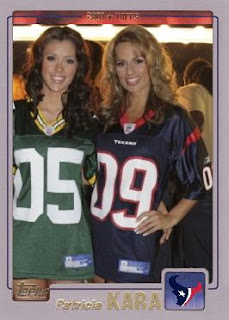