Celebrity Jersey Cards is a regular series in which I create virtual trading cards for celebs wearing sports jerseys.  With the Legends Football League having tryouts this month, I am featuring two LFL stars.

One of Canada's finest athletes (and people), Amanda Ruller is a versatile talent on and off the field.  She has competes as a sprinter, as a Bobsled and Skeleton athlete, as a running back in the LFL and more.  She currently is the Game Day host for the Saskatchewan Roughriders.  She has played for the Atlanta Steam and the Los Angeles Temptation, but for her Celebrity Jersey Card, Amanda appears in a Roughriders jersey (of course) while performing one of her hosting duties.  Check out AmandaBolic.com for more info on her and the Johngy's Beat promo video in the left column here for some fun. 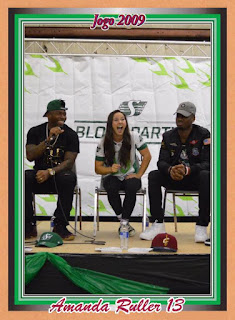 I met Carla Kosak when she first tried out for the Chicago Bliss.  My interview with her at practice is at On the Beat With Carla Kosak.  She, too, has taken her talents to several fields.  You can find her song "I Don't Want Your Man" on YouTube.  Carla has played wide receiver for one season with the Chicago Bliss and one with the Omaha Heart, but for her Celebrity Jersey Card, she is repping the New England Patriots, her favorite NFL team. 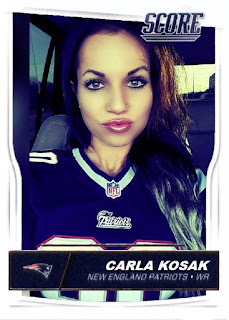