Celebrity Jersey Cards is a regular series in which I create virtual trading cards for celebs wearing sports jerseys.  Today, I show love to the Texas teams.

Danielle Fishel was born in Mesa, AZ and rose to fame as Topanga on tv's Boy Meets World.  Fishel has remained active directing, acting and doing voiceover work.  She also reprised her role as Topanga for Girl Meets World.  For her last Celebrity Jersey Card, Fishel flexed her muscle while modeling a Chicago Bears jersey, but today she is sporting the blue and silver of the Dallas Cowboys.  Fishel would be in my top ten of hopefuls for a future comic con and I am very confident I am not the only one hoping for that. 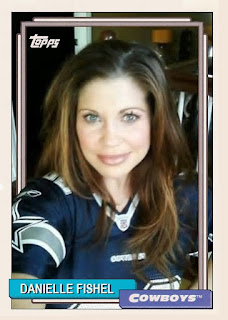 Musician Lindsay Ell was born in Calgary, but she is not wearing a Canadian Football League team jersey for her Celebrity Jersey Card.  Instead, she sports a Houston Texans jersey, despite now residing in Nashville, TN.  She is very versatile, as shown by her ability to play piano, guitar, mandolin, ukulele and other instruments. 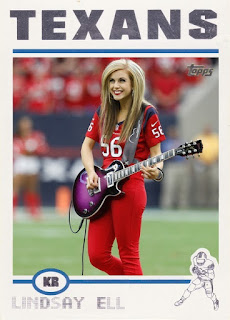